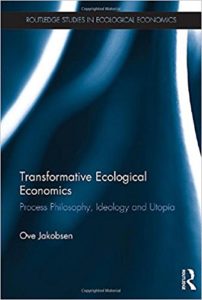 (Foreword to a new book by Ove Jakobsen, Routledge, 2017)

My friend and colleague Prof. Ove Jakobsen, who teaches ecological economics at Nordland University in Bodø, Norway, just published this inspiring book to which I wrote the Foreword posted below. Ove and I also coauthored a paper titled “A Conceptual Framework for Ecological Economics Based on Systemic Principles of Life,” to be published later this year in the International Journal of Social Economics.

When we look at the state of the world today, what is most evident is the fact that the major problems of our time — energy, environment, economy, climate change, social justice — cannot be understood in isolation. They are systemic problems, which means that they are all interconnected and interdependent, and they require corresponding systemic solutions. As Pope Francis puts it in his remarkable encyclical “Laudato Sì”:

Our common home is falling into serious disrepair… [This is] evident in large-scale natural disasters as well as social and even financial crises, for the world’s problems cannot be analyzed or explained in isolation… It cannot be emphasized enough how everything is interconnected. (Paragraphs 61, 138)

The global economy, in particular, is an integral part and, in fact, the main engine of our multi-faceted global crisis. In recent years this fact has been widely recognized, and many eloquent critiques of our current system of global capitalism have been published. However, there have been very few, if any, comprehensive narratives of an alternative economic system. In my view, this is the main achievement of the present book.

To convey the radical nature of ecological economics, Jakobsen introduces the contrast between ideology (a set of values and ideas that define the dominant paradigm, or status quo) and utopia (a set of values and ideas that transcend the existing order). Accordingly, he distinguishes between green economy and ecological economics. While the former attempts to reduce negative impacts within the current ideology of neo-liberalism, the latter involves fundamental changes of the dominant conceptual framework.

These fundamental changes can be seen as part of a broader change of paradigms from a mechanistic to a systemic conception of life, which has gradually been emerging over the last few decades. At the forefront of contemporary science, the universe is no longer seen as a machine  composed of elementary building blocks. We have discovered that the material world, ultimately, is a network of inseparable patterns of relationships; that the planet as a whole is a living, self-regulating system. The view of the human body as a machine and of the mind as a separate entity is being replaced by one that sees not only the brain, but also the immune system, the bodily tissues, and even each cell as a living, cognitive system. Evolution is no longer seen as a competitive struggle for existence, but rather as a cooperative dance in which creativity and the constant emergence of novelty are the driving forces. And with the new emphasis on complexity, networks, and patterns of organization, a new science of qualities is slowly emerging.

The new conception of life has important applications in almost every field of study and every human endeavor, because most phenomena we deal with in our professional and personal lives have to do with living systems. Indeed, the fundamental shift of perception from the mechanistic to the systemic view of life is especially relevant to economics. In Jakobsen’s words, “The only valid purpose of the economy is to serve the life processes in all kinds of social and ecological systems.”

I would like to highlight this fundamental connection between economics and life with a few examples, which are discussed extensively in this book. Throughout the living world, we find multi-leveled structures of systems nested within systems. Each individual system is an integrated whole and, at the same time, part of larger systems. For example, the human organism contains organs made of tissues which, in turn, are made of cells. On the other hand, the organism as a whole is embedded in larger social systems which, in turn, are embedded in ecosystems.

For economics, this implies that nature is superior to the economy rather than the other way around. The economy is a living system nested in other living systems — society, culture, politics, nature, and ultimately Gaia, the living Earth. Thus, in ecological economics, the economy becomes the servant rather than the master of nature. The economic system is integrated into the organic network of reality, the web of life. Every economic activity is designed to contribute to the development of viable societies within resilient ecosystems.

According to this systemic conception of life, neither the economy nor society can be understood as collections of objects, but only in terms of relationships between subjects. They cannot survive in an atomized state any more than an organism can survive in fragments. Moreover, the fact that the basic pattern of organization of all living systems is the network implies that an economy will be truly alive — flexible and capable of creative adaptations to changing circumstances — only if it is organized as a network, composed of smaller living networks and integrated into larger social and ecological networks. Indeed, Jakobsen argues that a new ecological economy might be best developed from a network of decentralized and globally interconnected ecovillages.

For a living economy this means that all economic processes need to be circular. Circular value chains make it possible to reduce both the consumption of virgin natural resources and the amount of waste that goes back to nature. To establish efficient material cycles in practice, as Jakobsen emphasizes, collaboration between governments, manufacturers, distributors, and consumers is essential. To build such a circular economy, our technologies and industrial systems need to be fundamentally redesigned, mimicking the natural ecological cycles.

In living systems, the metabolic flows of energy and matter are necessary for the continual regeneration and recycling of organic components, as well as for growth and development. However, there is a significant difference between the concepts of growth from a mechanistic and from a systemic perspective. Growth in nature is not linear, nor unlimited. While certain parts of organisms, or ecosystems, grow, others decline, releasing and recycling their components which become resources for new growth. This kind of balanced, multi-faceted growth is well known to biologists and ecologists, and it is in stark contrast to the concept of unlimited quantitative growth used by virtually all of today’s economists.

Unlimited economic growth on a finite planet is, of course, logically impossible. The objective of boundless quantitative growth is thus a dangerous misconception, which can be seen as the ultimate dilemma underlying most of our global problems. In his vision of ecological economics, Jakobsen advocates a fundamental shift from quantitative growth to qualitative development. Such qualitative development involves growth that enhances the quality of life through generation and regeneration. In living organisms, ecosystems and societies, qualitative development includes an increase of complexity, sophistication, and maturity.

The aim is to change the economy in a direction where it is possible to create a high quality of life without material growth. Ecological economics, the author explains, is intrinsically dynamic and assumes continuous development without increased consumption of natural resources. Instead of using one-dimensional instrumental thinking aimed at increased growth and profits, our energy and efforts should aim at greater complexity, beauty, and harmony. This fundamental change of perspective is perhaps the most radical, but also the most urgently needed proposition of this inspiring book.